“Mama, are there any ‘zanzare’ here?”, my daughter asked when we were at the beach a couple of weeks ago. “No, there are no mosquitos here”, I said. “Oh, OK, but I see there are ‘formiche'”, she said – pointing at some ants marching across the sand.

Code-switching: switching between two languages during a conversation between two or more people. When Antonio and I were learning eachothers languages, we did it all the time. First by only speaking our own language, so I would answer his Italian questions in Dutch. After a while, we would continue the conversation in the language it started in. And finally, we developed our own language where we use Dutch words in Italian frases or invent new words like ‘fietsare’ (riding a bike, ‘fiets = bike’ in Dutch and -are is the Italian verb conjugation).

Code-switching: why do we do it?

When I noticed my daughter (3,5) started to ‘code-switch’ more often, I was wondering whether this was caused by her being more proficient in one language than in the other. Some reading taught me that there are many reasons for code-switching: 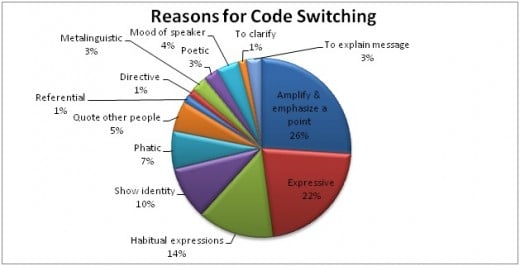 It is seen rather as an extra tool than a weakness. Only if you master both languages, you’re able to succesfully apply code-switching. So, no worries about my daughter’s language proficiency for now.

What could be worrying though, is the fact that code-switching is also used to either identify with, or rebel against the person you’re speaking to. Julia gave me a taste of her creativity a few days ago:

After asking my daughter nicely if she would go brush her teeth, I told her I wouldn’t take ‘nee’ (‘no’ in Dutch) for an answer. She looked at me, thought for a second and then said triumphantly: ‘NO’ (in Italian).

I’m so happy it still takes years before she turns 16.

3 gedachten over “From one language to the other”